We recently ate the traditional Norwegian pinnekjøtt dinner, which we eat a week or so before Christmas (because we like to have something else on Christmas Day).  Every year we make mashed rutabegas (kålrotstappe) and every year they just don't work out.  Until this one.  I read several recipes and decided to try something a little new, that was (harhar) a mashup of several other recipes.  I started with one and a half rutabagas, 3 carrots, and a beef bouillion cube in a pot: 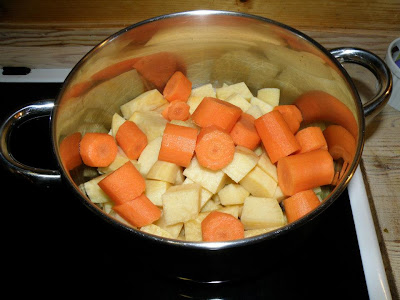 This boiled happily away until the veggies were soft, about 45 minutes or so.  I then drained them and dumped the lot into my KitchenAid, and added about 2 tablespoons of butter and about 150 milliliters of lactose-free cream.  And it was divine.  DIVINE!  I wish I had gotten a picture of the mash alone, but I forgot so here is the whole dinner with the mash off to the side. 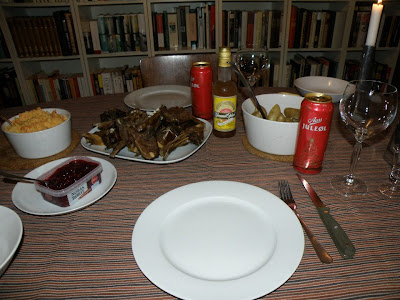 We'll be making our mash this way from now on.

Yesterday was St. Lucia's Day, or Lucia-dagen as it's called locally.  This is (as far as I know) primarily a Swedish celebration but, like Ikea and Volvo, it has trickled westwards into Norway and now most of the little kids here celebrate it too.  I, not even being of Scandinavian descent, know pretty close to nothing about the traditions, so I had to get help at all of the stores to be sure I got the right accessories for Henrik.  He ended up looking cute as a button (as always), but being a careful and rather timid boy, he was frightened by the commotion of  the older kids at the kindergarten and had to leave the assembly and parade to watch from the sidelines with me.  So without any further ado, here are some photos from Henrik's first Lucia-dagen: 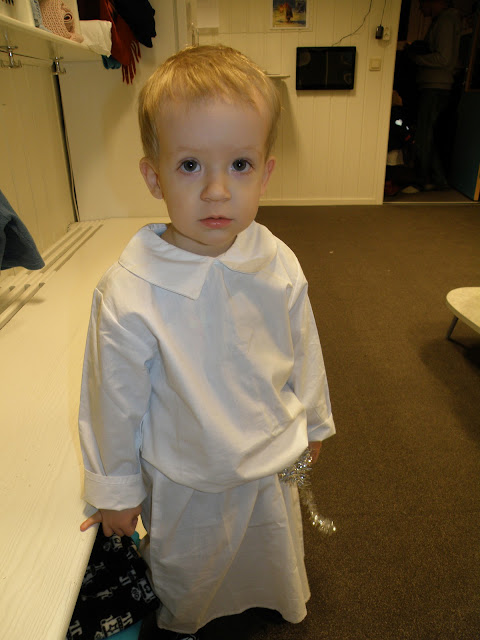 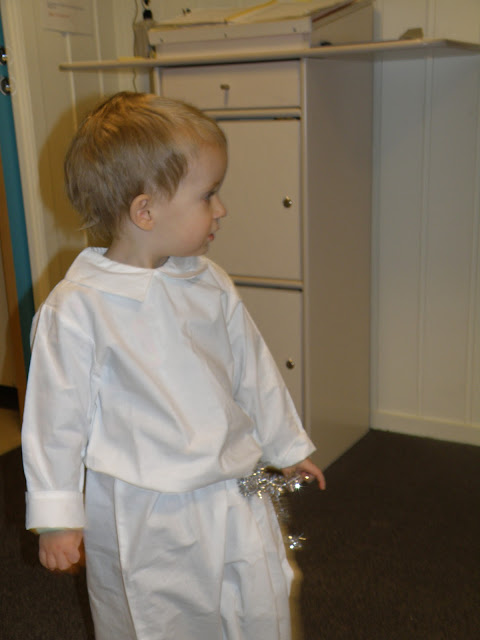 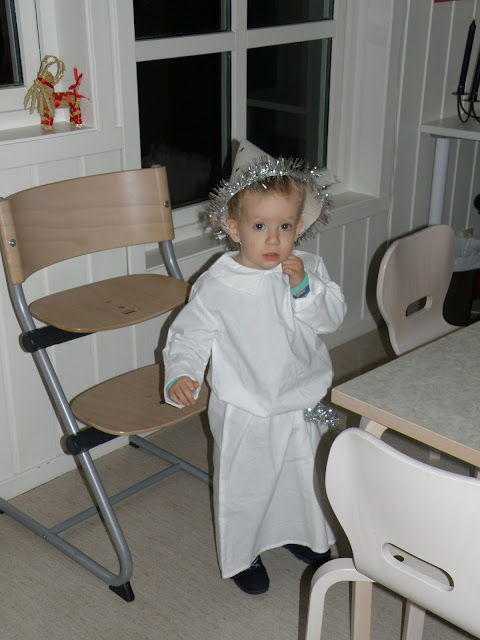 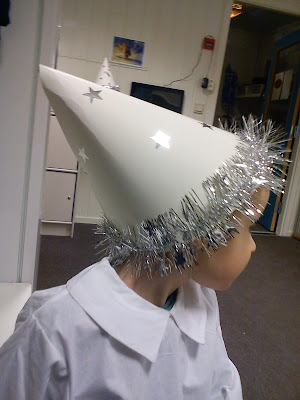 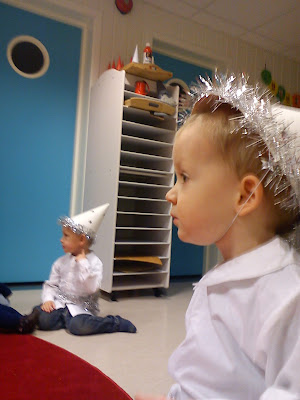 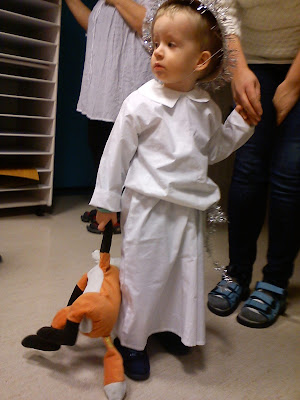 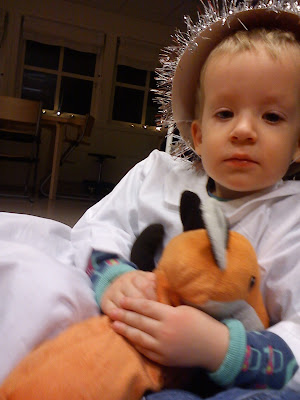 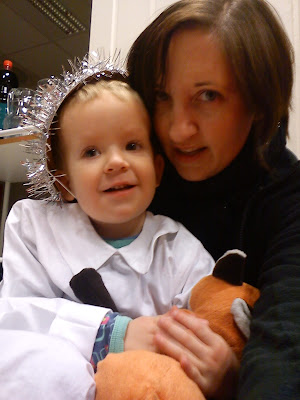 Email ThisBlogThis!Share to TwitterShare to FacebookShare to Pinterest
Location: Norway


Several years ago (2003), I got the idea to make an ornament wreath.  It was a beautiful disaster.  Like most of the blogs now recommend, I used hot glue, glass ornaments, and a foam form.  BIG MISTAKE.  Hot glue is good for exactly nothing at all.  I hate it.  All it does is get long stringy hot glue boogers all over the place without actually  doing a decent job of sticking Thing A to Thing B.  Here is a photo of it, while it lasted: 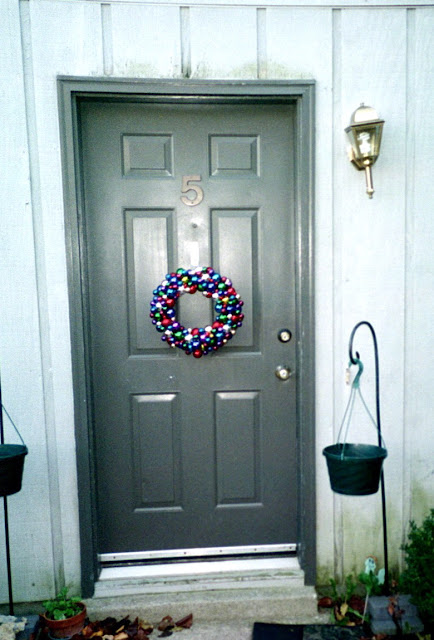 Every time I went outside I had to sweep up fallen ornaments.  After a week it looked like it had mange.  I was quite disappointed.

Having learned from my mistakes, and having a place big enough for plenty of decoration, I thought I would try again.  I was thinking of using a wire hanger as a basis, an idea that was confirmed by this site.  Then I went to Europris, which is a discount retailer that resembles a sort of cross between Dollar General and what KMart was like back when I was growing up: a good place to get stuff on a budget but not somewhere you want to get anything really important.  A good deal of their business is seasonal stuff which they sell really cheaply, even by Norwegian standards. So I loaded up on plastic ornaments, which only look plastic if you take a really close look at them.  From a distance they can be mistaken for glass, but if they pop off of the wreath, there is no mess, just a plasticky bounce and a splat of glitter. 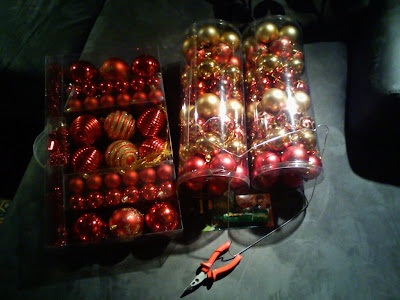 About an hour later, I had this.  I filled in the gaps by using the red tinsel garland, rather than by gluing on any more ornaments; I didn't want to use glue at all, and I managed to avoid it.  I had about a half a tube of ornaments leftover plus most of the ornaments in the box to the left in the photo.  Those will be used for other projects; we might hang some from our trees or bushes, or from the patio railings.  Or stash them for further crafting. 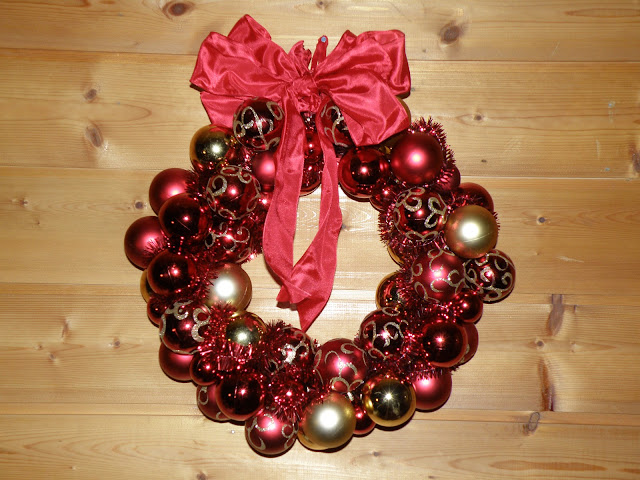 The other cool thing about this wreath is that, apart from the bow, it's reversible.  So the side that is against the wall (yes, that is a wall, not the floor; I live in a lumberyard) could easily have been the front.  So if you have a place to hang a free-hanging wreath, such as from a patio, this would work since both sides are the "right side"; you would just need to add a bow to both sides.

Henrik saw it for the first time this morning.  He pointed at it and said "Apples!"  So now it's the shiny apple wreath.
Posted by shea at 01:32 2 comments:

On Apples and Tomatoes

I love tomatoes.  Love them.  They're my favorite fruit, or vegetable if you want to call them that.  I'll sit and eat cherry tomatoes the same way other people might munch on grapes.  One of the worst things about living in the far, far north is that the only tomatoes we can get are underripe, flavorless, hydroponic greenhouse tomatoes.  Like these*: 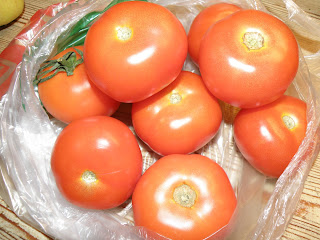 This is where all of those years studying plant physiology comes in handy.  Apples give off ethylene gas, which is a ripening hormone.  It's why you can't store apples and, say, tulip bulbs in the same place.  The ethylene from the apples kills the shoot inside the bulb.  But it also helps our boring, watery tomatoes get some flavor.  Here are the same tomatoes, after 24 hours in a closed plastic bag with a really ugly, bruised-up apple. 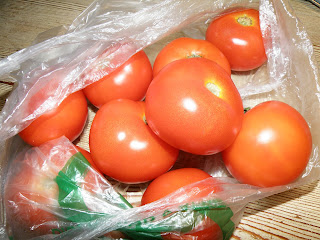 These could have used another 24 hours in the bag, but are now fit for consumption, as pizza sauce.  Which Vidar makes every friday, from scratch.  Yum!

In an unrelated note about apples, Henrik has now added that word to his vocabulary, and can finally tell his kindergarten teachers what sort of fruit he wants for his afternoon snack.  (Apple is "eple" in Norwegian; almost a homophone for the English word.) We didn't even know he liked apples until we went to the kindergarten with him to celebrate his birthday (a few days delayed, no thanks to a stomach virus).  We had tried to give him apple several times before but he never ate them so we gave up. Then we're sitting at the table at snack time and his teacher tells us "Oh yes, Henrik loves apples.  He eats so many slices every day, they're his favorite."  Which is the first of what will be a long list of things we never knew about our own kid.  It's still a bit strange to think that he now has this life apart from us, every day, at kindergarten.

*Apologies for the rotten lighting in these photos.  It's Norway.  I won't have decent lighting again until March.  Maybe April.
Posted by shea at 09:46 No comments:

Henrik was finally feeling like himself again last weekend, after a long, drawn-out stomach virus.  And on sunday afternoon, it finally stopped raining.  That meant it was time for the Puddle Inspector to get to work.  (Some of these photos were on Facebook earlier, but not all of them.) 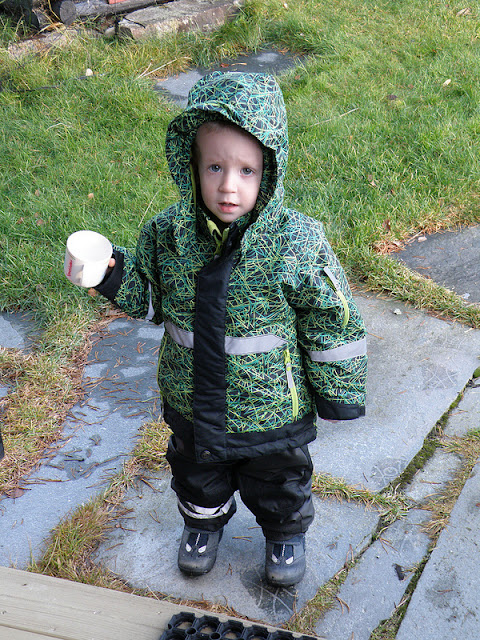 Ok, mamma and pappa, I have my high-tech super-sensitive precision puddle measuring apparatus and my protective outer garments on.  Let's go check those puddles! 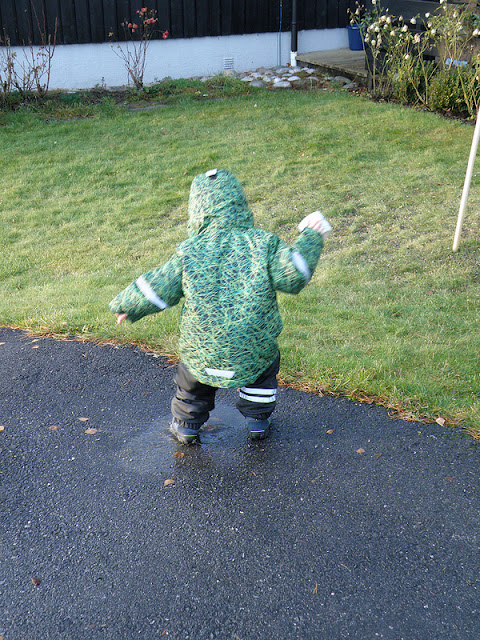 Here's one!  A bit shallow but definitely splashable. 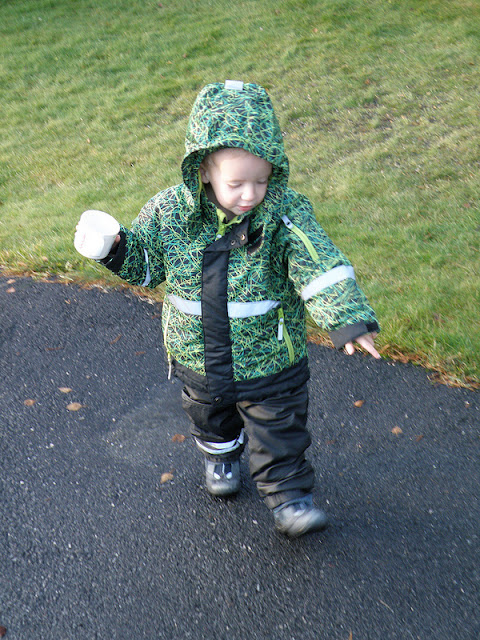 There's another one!  Let's go! 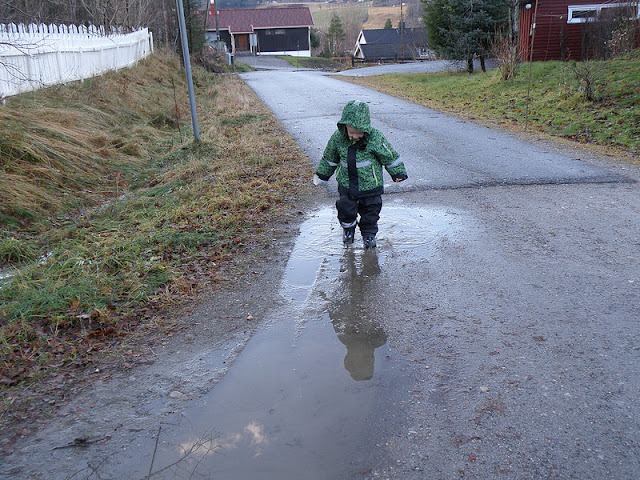 Whoa, this was a long one!  Nice and deep too!  Now this is what I call splashing. 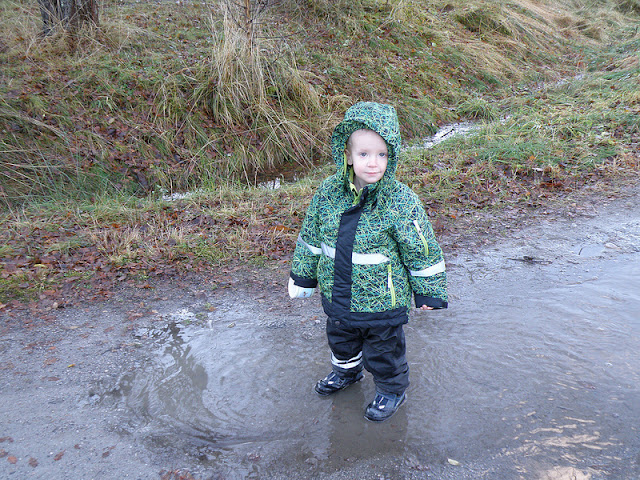 You mean there are even more puddles to check?  What are we waiting for, let's go! 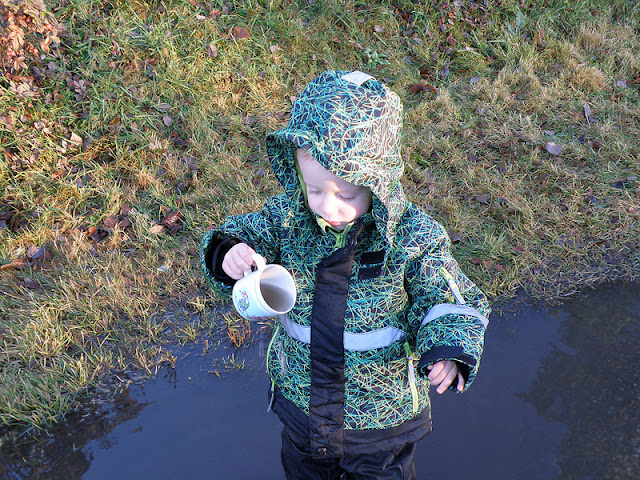 Let's see here, water a nice grey-brown, hint of road salt and gravel, no trace of oil or contaminants.  Perfect! 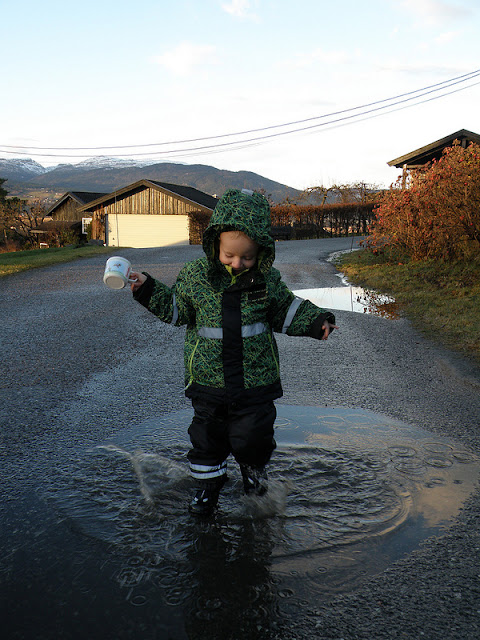 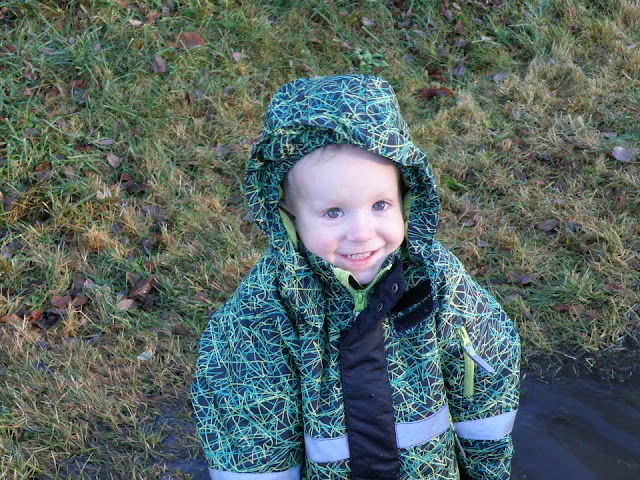 One way that Henrik copes with being bilingual is to call animals by the noises they make, rather than their names.  Every animal has at least two names, but only one sound.  This idea is reinforced by his two Fisher Price "The Farmer Says" toys; one in English and one in Norwegian, but with identical animal sounds.  So it's not an owl or en ugle, it's a "hee-hee-hee" (Henrik's owls don't hoot so much as giggle).  Panting means a dog, or it means my poppies because he thinks I said for him to look at the puppies in the flowerbed. Cows and kuer are "mmm".  Snakes and slanger are "hisssss". And so on.

Except for foxes.  Foxes are "alala".  The reason for this is the display of stuffed animals near my office.  It's a large case, with rodents, birds, and such, but the highlight of the display for Henrik is the fox.  So when I ask him if he wants to see the animals, what he really wants is to see the fox.  So animals = alala = fox.
Posted by shea at 04:04 2 comments:

I've been meaning to start this blog for a while, but only got to it today.  Henrik is my son.  He's two years old, and bilingual.  So this blog will be about him, and parenting, and knitting, and good food.  At least that is the plan.
Posted by shea at 04:50 2 comments: